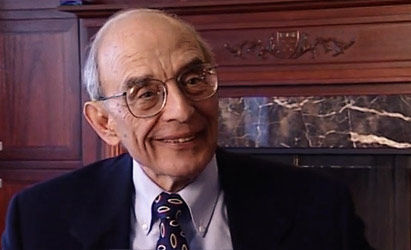 Chris Argyris’ work was driven by a fundamental faith in human nature. His optimism was bolstered by his considerable intellect. Argyris was a formidable thinker – even by the lofty standards of his employer, Harvard Business School.

Argyris was brought up in the New York suburbs and spent some time in Greece with his grandparents. Prior to joining Harvard he was at Yale where he was a professor of administrative science. His qualifications embraced psychology, economics and organizational behavior. He became the James Bryant Conant Professor of Education and Organizational Behavior at Harvard Business School in 1971.

Argyris’ early work concentrated on the then highly innovative field of behavioral science. Indeed, his 1957 book, Personality and Organization became one of the subject’s classic texts. Argyris argued that organizations depend fundamentally on people and that personal development is and can be related to work. The problem, Argyris believed, in many organizations is that the organization itself stands in the way of people fulfilling their potential. The task for the organization is to make sure that people’s motivation and potential are fulfilled and well-directed.

Argyris was part of the human relations school of the late 1950s and involved in the work of the National Training Laboratories which had a mesmeric attraction for a host of other important thinkers. ‘He was bespectacled, dark-complexioned, and slender, with a narrow face that tended, almost despite himself, to break into a delighted grin when arguments grew hot, as if he was overjoyed at the chance to test himself,’ says Art Kleiner in The Age of Heretics. ‘His voice was distinctively mild-mannered and reedy with a slight European tinge. His style of debate was analytical – indeed, his approach to life was passionately devoted to inquiry, reasoning, and theory. But he was drawn to the kinds of problems that most analytical people eschew, the riddles of human nature. In particular, why did people fail to live up to their own professed ideals? Why was so much human behavior so self-frustrating, particularly in organizations?’

These are questions which Argyris continued to ask with dogged persistence. Central to his process of inquiry was the entire concept of learning. Argyris examined learning processes, both in individual and corporate terms, in huge depth. ‘Most people define learning too narrowly as mere problem solving, so they focus on identifying and correcting errors in the external environment. Solving problems is important, But if learning is to persist managers and employees must also look inward. They need to reflect critically on their own behavior,’ he said. Problems with learning, as Argyris revealed, are not restricted to a particular social group. Indeed, it is the very people we expect to be good at learning – teachers, consultants and other ‘professionals’ – who often prove the most inadequate at actually doing so.

His most influential work was carried out with Donald Schön (most importantly in their 1974 book, Theory in Practice, and their 1978 book, Organizational Learning). The combination of the psychologist, Argyris, and the more philosophical, Schön, produced some original perspectives on age old problems.

Argyris and Schön originated two basic organizational models. The first was based on the premise that we seek to manipulate and form the world in accordance with our individual aspirations and wishes. In Model 1 managers concentrate on establishing individual goals. They keep to themselves and don’t voice concerns or disagreements. The onus is on creating a conspiracy of silence in which everyone dutifully keeps their head down.

Defense is the prime activity in a Model 1 organization though occasionally the best means of defense is attack. Model 1 managers are prepared to inflict change on others, but resist any attempt to change their own thinking and working practices. Model 1 organizations are characterized by what Argyris and Schön labeled ‘single-loop learning’ (‘when the detection and correction of organizational error permits the organization to carry on its present policies and achieve its current objectives’).

In addition, Argyris and Schön proposed a final form of learning which offered even greater challenges. This was ‘deutero-learning’, ‘inquiring into the learning system by which an organization detects and corrects its errors’.

While defensiveness has remained endemic, corporate fashions moved Argyris’ way. With the return of learning to the corporate agenda in the early nineties, his work became more fashionable. This did not temper the rigor of his output or of his arguments. The questions remained. ‘Any company that aspires to succeed in the tougher business environment of the 1990s must first resolve a basic dilemma: success in the marketplace increasingly depends on learning, yet most people don’t know how to learn. What’s more, those members of the organization that many assume to be the best at learning are, in fact, not very good at it,’ he noted in an article.

The challenge – and mystery – of learning remained profound. The riddle of human nature remained as intractable as ever; and Chris Argyris’ curiosity was undiminished. ‘Many professionals have extremely brittle personalities. When suddenly faced with a situation they cannot immediately handle, they tend to fall apart,’ he said. ‘There seems to be a universal human tendency to design one’s actions consistently according to four basic values:

1. To remain in unilateral control;

2. To maximize winning and minimize losing;

3. To suppress negative feelings; and

4. To be as rational as possible – by which people mean defining clear objectives and evaluating their behavior in terms of whether or not they have achieved them.’

In his book Flawed Advice and the Management Trap: How Managers Can Know When They’re Getting Good Advice and When They’re Not, Argyris turned his attention towards the field of organizational change.  He was clearly unimpressed with much of the current advice, opinion and commentary  handed down by academics, consultants and commentators believing that it, “does not work. . . . It is simply too full of abstract claims, inconsistencies, and logical gaps to be useful as a concrete basis for concrete actions in concrete settings.”  Never one to pull punches he used some of the better known books on the subject, such as Stephen Covey’s Seven Habits of Highly Effective People and John Kotter’s Leading Change, in an attempt to demonstrate how many commentators fail to avoid discrepancies between principles espoused and courses of action advised.

Chris Argyris was one of the first thinkers installed in the Thinkers50 Hall of Fame. His right to be there was unarguable as his impact on management was lengthy and substantial.

PrevClay Christensen accepts the 2013 Top Thinker Award
Video Interview: Liz Wiseman’s Big IdeaNext
PrevPrevious
NextNext
We use cookies to ensure you get the best experience on our website. By clicking “Accept”, you consent to the use of ALL the cookies. Read More Settings Accept All Reject
We Use Cookies...