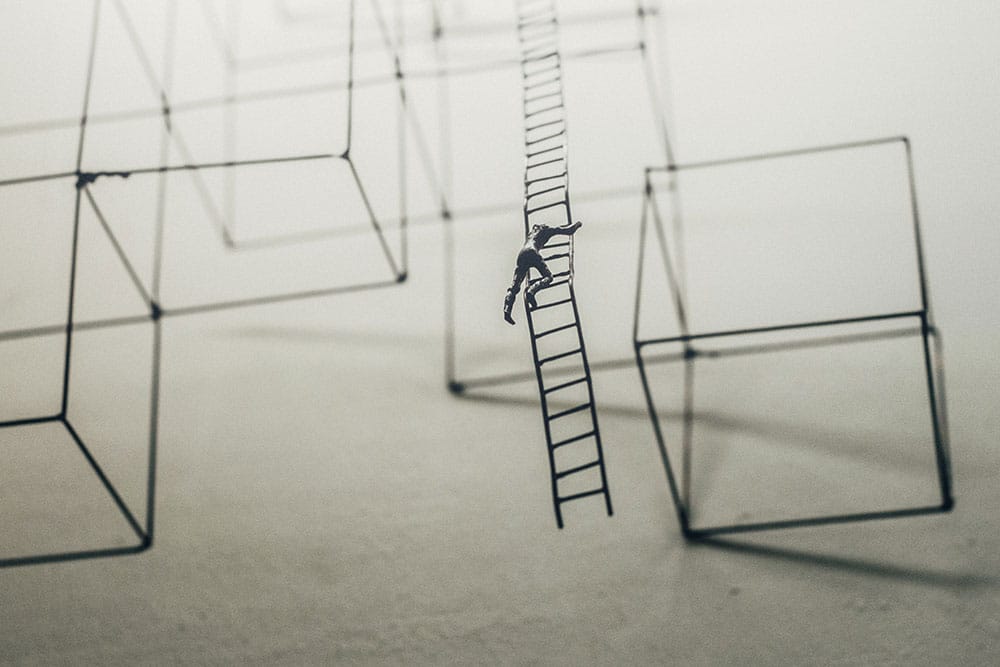 Benjamin Hardy went from living in his cousin’s house, playing World of Warcraft for 15 hours a day, with no future plans, to happily married, adopting three foster children, becoming the number one writer on Medium, and landing a $300,000 book deal.

What pushed him to leap from a stagnant daily routine to become a prolific writer and PhD candidate? How did he disrupt his day to day life and finally get what he’d always wanted?

How many of us have felt stuck like Benjamin?

Whether it be in a tedious role at work, checking and rechecking Twitter, or in our closest personal relationships, all of us at one time or another experience that sticky feeling of boredom, complacency, or even apathy.

We know something needs to change—we want to get unstuck—but we just don’t know how to do it.

Based upon my years of experience helping companies and individuals push past organizational and financial walls, and my recent research and course with Richie Norton, I offer a few jumping off points for those feeling a little less than “alive”.

You’ve got to do it. You have to get uncomfortable to make any sort of meaningful change.

For Ben, that meant dramatically changing his environment. He went from gaming all day to signing up for missionary service for two years. Once completely removed from his old life, friends included, he was free to rise to the occasion and allow the environment of selfless service transform him. Once home, he knew he couldn’t return to his old stomping grounds because that would only mean returning to old habits.

Get outside of your routine environment to get clarity.

So, he jumped into his psychology studies, focused on getting into grad school. But he was rejected. Two years in a row. He was stuck again. Seeing that the typical “rules” were not working for him, he changed his environment, just as he had after high school. He and his wife moved to Ireland for three months to work on a goat farm. With a fresh perspective, they returned home and stepped into an even more significant life move: becoming foster parents to three children.

And here’s the crux of Ben’s book, Willpower Doesn’t Work, amplified in his own personal life: change your environment, change your results. Using something he now calls “proximity effect”, he applied the radical idea that willing and pushing and blaming yourself to do something doesn’t do anything. But changing your environment does. With increased financial demands with his new family of five, he started writing. But he didn’t just write here or there. He wrote all the time. He risked time and money and invested everything he could into his newfound writing venture. He bought benjaminhardy.com for $800 (80% of his monthly Assistantship stipend) and proceeded to pump out 40 blog posts in only three months.

His diligence and dedication to his own blog and Medium led Ben to publishing Eight Things Every Person Should Do Before 8:00 AM, which went viral. That article launched him into a whole new arena. He was now the number one writer on Medium with millions of followers.

Ben’s risks—pushing the perceived rules and practicing what he calls “mindfulness”—taught him to figure out how to maximize the rules and become an adaptable learner. If you want a change, you must be willing to get uncomfortable.

If you want to get unstuck, get out of your comfort zone. The potential of a person is based on the demands of their situation.

2 – Take a good look around

It’s easy to feel stuck. The challenge is figuring out why.

After two years of grad school rejection, Benjamin looked around and knew the typical “rules” of research were not working for him. So he found a way to move within the system he understood in a way that was more beneficial to him–more face time with mentors, more publishing. Looking outside his current department opened his eyes to new, more willing, mentors and unhampered publishing.

A simple way to incorporate a thoughtful look around on a regular basis is taking what Benjamin calls “Disconnected Days”. Once a week, get outside your routine and give yourself a break for a day. “Being outside your routine environment is very important for making big decisions.” Turn your phone on silent or leave it in the car, walk a new route, call an old friend, whatever gets you doing something different. You’ll be surprised how lighter you’ll feel when trying something new and changing your environment.

Remember – Ben knew he didn’t want to sit on a couch and play video games for the rest of his life. But he didn’t will himself away from gaming, and knew he couldn’t, so he changed his environment. He looked inside himself and knew there was more, and then took quick action to remove himself from old addictions and place himself in a place of daily accountability of service and routine on a service mission.

And important to note, he’d created an environment for himself that made it safe to change. When he was stuck in his Phd advancement, his wife initiated the move to Ireland, understanding that a new and different way of life was exactly what he needed to reevaluate what he really wanted.

He was open and honest about what he was capable of and believed the perfect opportunity would present itself, if he was willing to get uncomfortable.

When you make a decision, the universe conspires to make it happen.

With a little nudging and a move to rural Ireland, Benjamin realized the prescribed academic “rules” and mentorship patterns were in no way helping him. So he found an alternate path. One that he had no idea would work out, but hoped would. He brazenly asked a young professor he didn’t know, who taught in a totally different department—in an elevator—whether or not he needed an assistant. The professor said yes and asked Benjamin to assist right away. Now on this path and in this new environment, Benjamin rose to the occasion. He reworked a previously rejected paper for 40 hours that first week, resubmitted it, and his first paper was published.

Ben now had access to a world he’d previously invested hundreds of hours trying to break into. All by risking unconventional routes to get where he wanted to go.

He’d pursued discomfort, looked deep inside himself to determine what he really wanted, created a safe space to make big changes, and ultimately jumped when the opportunity arose.

He felt excited, adventurous, and alive—just like we all want to feel. Perhaps because he’d struggled to find a path that brought results throughout his academic career, he appreciated the feeling of being unstuck at a whole new level.

It’s never too late to take the leap.

Wondering if it’s time for you to get unstuck like Benjamin did? This free simple checklist will help you unlock your mind and disrupt your life for good.

Whitney Johnson is one of the world’s leading management thinkers (Thinkers50), author of the critically acclaimed Disrupt Yourself: Putting the Power of Disruptive Innovation to Work and host of the Disrupt Yourself Podcast.

PrevDisrupting The Biggest Career Disruption of All
Disrupting the Well-Oiled Machine: Kyrie Irving’s Infamous TradeNext
PrevPrevious
NextNext
We use cookies to ensure you get the best experience on our website and continuing implies your consent - Read our full cookie policy Okay, don’t show me again
We Use Cookies...