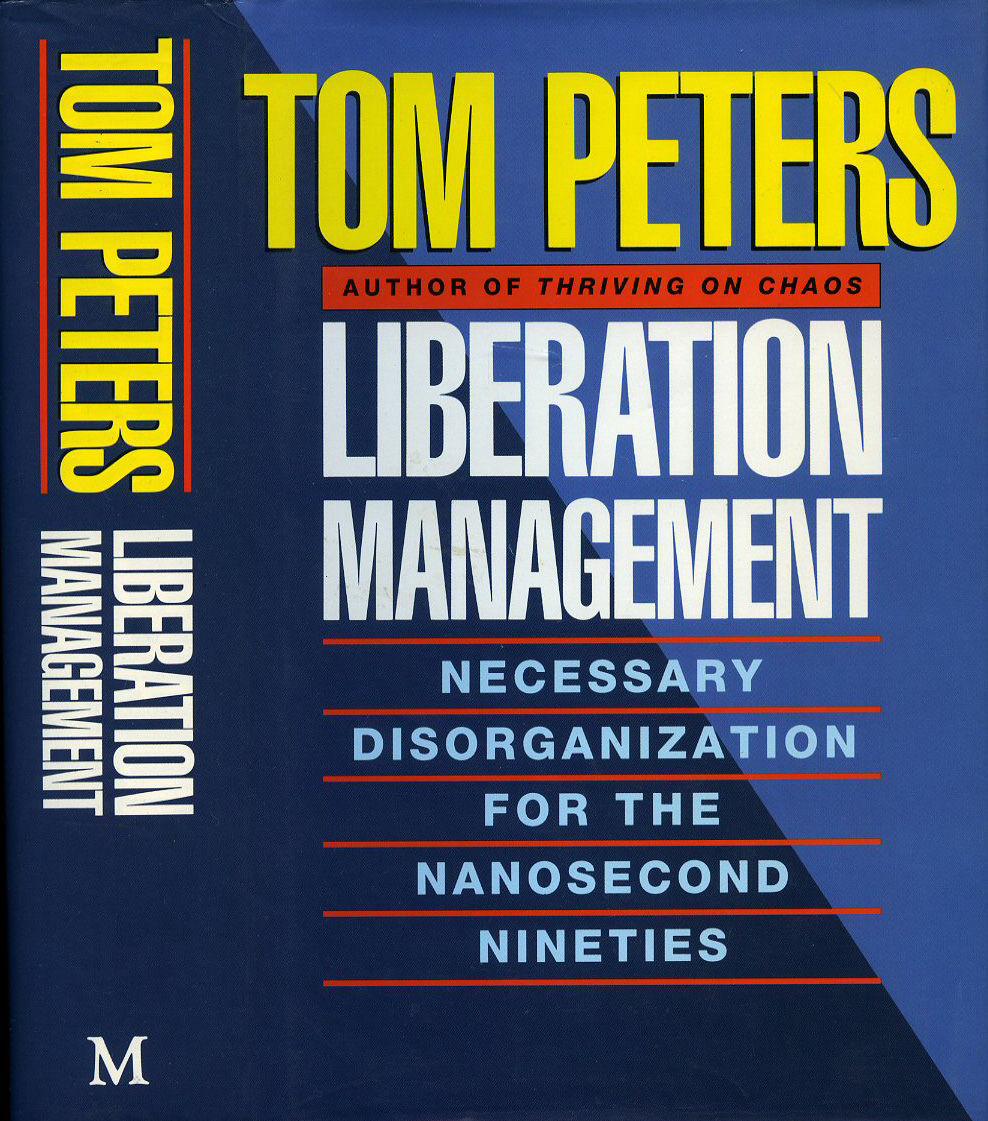 The best book on innovation? There are, of course, a great many to choose from. The bookshelves groan under the weight of innovative wisdom.  Among our own favorites is the large, rambling and gushingly anecdotal, Liberation Management, a sprawling compendium of Tom Peters’ thinking on management in the ‘nanosecond nineties’.

The original manuscript was 1,900 pages long and was only reduced to a manageable size after a third of the material was cut.  It is, observed Karl Weick, written in ‘hyper-text’. The language is colorful – ‘middle managers, as we have known them, are cooked geese‘; ‘the definition of every product and service is hanging.  Going soft, softer, softest. Going fickle, ephemeral, fashion’ — and, at times, impenetrable as Peters’ passion overwhelms his prose.  Liberation Management, published in 1992, received the best and worst reviews of Peters’ books.

Liberation Management marks an important development in Peters’ career.  It emerged from an intensive period of reading Chandler and Hayek and was the first of his books since In Search of Excellence to feature in-depth examinations of individual companies.

Liberation Management’s central message reflects a substantial change of emphasis from that of Peters’ earlier works (In Search of Excellence, A Passion for Excellence and Thriving on Chaos).  Ten years on from In Search of Excellence, Peters contends that his previous work was marred by paying too little attention to the perennially vexed question of organizational structure.

Peters does not mean structure in the traditional hierarchical and functional sense.  Indeed, his exemplars of the new organizational structure are notable for their apparent lack of structure.  And herein lies Peters’ point.  Companies such as CNN, ABB and Body Shop thrive through having highly flexible structures able to change to meet the business needs of the moment.  Freeflowing, impossible to pin down, unchartable, simple yet complex, these are the paradoxical structures of the future.  ‘Tomorrow’s effective “organization” will be conjured up anew each day,’ says Peters.

Only with such vibrant structures will companies be able to deliver the customer service championed by Peters in his previous books and, it is only through such dynamic organizational forms that companies will be able to survive.  Not that Peters forgets customer service.  ’How customers  perceive their relationship with your company determines whether or not you’ll have a customer for life.  That’s almost obvious, if almost always ignored.’

Key to the new corporate structures envisaged by Peters are networks with customers, with suppliers and, indeed, anyone else who can help the business deliver.  ‘Old ideas about size must be scuttled.  “New big’, which can be very big indeed, is ‘network big’.  That is, size measured by market power, say, is a function of the firm’s extended family of fleeting and semi-permanent cohorts, not so much a matter of what it owns and directly controls,’ he writes.

And, networks must move quickly.  The book’s central refrain is that of fashion — ‘We’re all in Milan’s haute couture business and Hollywood’s movie business,’ writes Peters. ‘This book is animated by a single word: fashion.  Life cycles of computers and microprocessors have shrunk from years to months.’ The new model organization moves fast and continually does so, seeking out new areas which make it unique in its markets.

Clearly, this requires quite different managerial skills than those traditionally needed by managers.  Indeed, Peters says that the new organizational forms he depicts are ‘troublesome to conceive – and a downright pain to manage’.  The new skills are now familiar.  Peters bids farewell to command and control, ushering in a new era characterized by ‘curiosity, initiative, and the exercise of imagination’.  It is, he argues, a step into the unknown for most organizations but also a return to first principles:  ‘For the last 100 years or so….we’ve assumed that there is one place where expertise should reside: with ‘expert’ staffs at division, group, sector, or corporate.  And another, very different, place where the (mere) work gets done.  The new organization regimen puts expertise back, close to the action – as it was in craft-oriented, pre-industrial revolution days…We are not, then, ignoring “expertise” at all. We are simply shifting its locus, expanding its reach, giving it new respect – and acknowledging that everyone must be an expert in a fast-paced, fashionized world.’

Peters identifies Liberation Management as the best of his books.  Its merits – and drawbacks – lie in its relentless energy and endless examples.  Interestingly, many of the companies featured by Peters have been used as examples in a wide variety of later books.

Peters explains: “I’ve moved from the hyper-organized In Search of Excellence with its McKinsey logic to the very scatter shot A Passion for Excellence to the hyper-organized Thriving on Chaos than the mightily disorganized Liberation Management.  Think of an accordion.  It tightened up with In Search of Excellence, loosened up and then became anal-retentive with Thriving on Chaos and then completely loosened with Liberation Management.

“Now, I say, beware of the champions of order, the people who offer “rules” for tidy and righteous living. It doesn’t work that way.  Seeing complex issues in black and white is stupid.  Life is messy, very messy.  In the real world, you have to enjoy the mess. This is particularly true in a downturn. You need to see flux as an opportunity, a chance to launch the bold initiatives you have always meant to launch.”

PrevQ&A with Monika Hamori, professor at IE Business School, Madrid
Five Management Idea Trends We’re Keeping An Eye OnNext
PrevPrevious
NextNext
We use cookies to ensure you get the best experience on our website. By clicking “Accept”, you consent to the use of ALL the cookies. Read More Settings Accept All Reject
We Use Cookies...