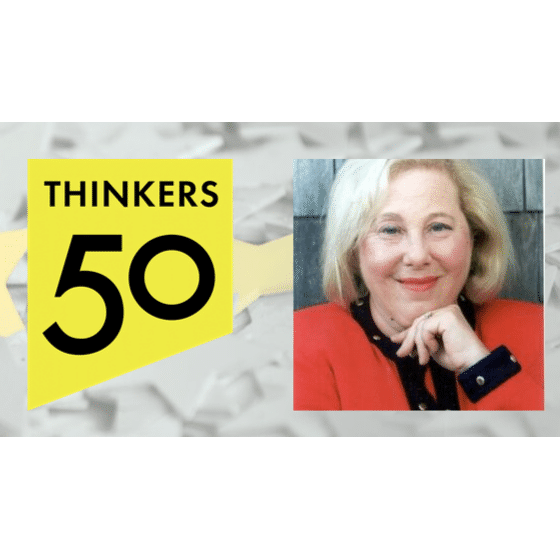 “The Lifetime Achievement Award is given to someone who has had a long-term impact on the way people think about and practice management,” explains Thinkers50 co-founder Des Dearlove. “Rosabeth Moss Kanter has championed a humane, inclusive, practical, and inspiring brand of management throughout her career. From Men and Women of the Corporation and The Change Masters to her forthcoming book, Think Outside the Building, Rosabeth has a distinctive and compelling take on what it takes to manage. She has truly translated ideas into action and has been engaged in policy and advocacy on major societal issues, including corporate social responsibility, innovation policy, economic development, transportation, national service and the future of cities. Her work has been required reading for all who work in and lead organizations for more than four decades – she was featured in the first ever Thinkers50 ranking in 2001 and was repeatedly ranked among the world’s leading management thinkers.”

Rosabeth Moss Kanter holds the Ernest L. Arbuckle Professorship at Harvard Business School. She co-founded the Harvard University-wide Advanced Leadership Initiative, guiding its planning from 2005 to its launch in 2008 and serving as Founding Chair and Director from 2008-2018 as it became a growing international model for a new stage of higher education. She is a former editor of the Harvard Business Review. Before joining the Harvard Business School faculty, she held tenured professorships at Yale University and Brandeis University and was a Fellow at Harvard Law School, simultaneously holding a Guggenheim Fellowship. Her Ph.D. is from the University of Michigan which also awarded her an honourary degree (one of 24 she has now received).

Kanter’s other books include MOVE: Putting America’s Infrastructure Back in the Lead; SuperCorp: How Vanguard Companies Create Innovation, Profits, Growth, and Social Good; Evolve! Succeeding in the Digital Culture of Tomorrow; Confidence: How Winning & Losing Streaks Begin & End; Men & Women of the Corporation; A Tale of ‘O’: On Being Different; Work & Family in the United States; When Giants Learn to Dance and World Class: Thriving Locally in the Global Economy.

“I accept this tremendous honour with gratitude and humility, on behalf of all those seeking to use their leadership to improve the world,” says Professor Kanter. “I’ve always been committed to deep understanding of major problems affecting people’s lives – at work and beyond – and finding ways to overcome barriers to change through creativity, innovation, and transformation. It’s a privilege to contribute to showing how research and ideas can make a positive difference in business and in the world.”

Rosabeth Moss Kanter will receive the Lifetime Achievement Award at Thinkers50 2019 on 18 November 2019 at the Grand Connaught Rooms in London. Management thinkers from throughout the world will attend the event. She will be leading a discussion about her ideas and career as part of the day’s activities. Throughout October and November Thinkers50 will be highlighting the work of Professor Kanter on its website.