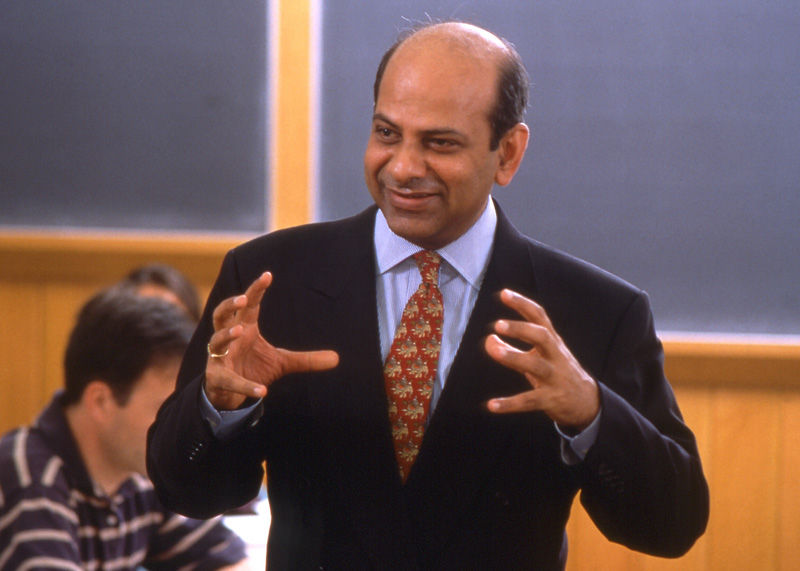 By Vijay Govindarajan and Hylke Faber

“How can I pass along the richness of my life in a way that allows them to build on everything I have seen and learnt?”
—Chris Capossela, Chief Marketing Officer, Microsoft

How can we continuously evolve the way we lead our teams? Innovative leaders know that one way is to evolve themselves first.

“There is no magic here—just a lot of hard work and a lot of introspection to try to figure out what’s gone well and what’s gone badly.” Chris Capossela knows a thing or two about leadership.  He is Microsoft’s chief marketing officer. Affectionately known by his team as ‘ChrisCap’, he is one of the company’s most beloved leaders. What’s behind his success? His view on leadership gives a clue: “How can I pass along the richness of my life in a way that allows them to build on everything I have seen and learnt? Obviously it’s an impossible task, but boy, is it fun to try!”

In our work we’ve learned that great leaders like Capossela skillfully balance attention across three ‘boxes’: deliver results in the present (Box 1), selectively forget the past, letting go of old values, beliefs, and behaviors that no longer serve them or their organizations (Box 2), and create the future, by adopting new beliefs, attitudes and behaviors (Box 3). We sat down recently with ChrisCap to understand some of the Box 2/Box 3 leadership learnings that have led to his present-day ‘magic’.

Be a Catalyst—You Are the Culture

Capossela is known for bringing out the best in others. He tells us it wasn’t always the case; when and how did he make the shift?

“There was this funny thing that happened in college,” he recalls. “My brother and I went to the same college. He is two years older than me and is an incredible leader, one of those people you just gravitate to. He did his junior year abroad so we stayed in touch over email. I was doing the standard first year; kind of homesick and feeling a little bit alone and all that. I was trying out for the tennis team, and he was already on it. I was confiding in him how I didn’t feel like part of a group; I didn’t feel like part of the team because I wasn’t so great. I was just scratching my way to get on the team.”

Capossela leans in, “My brother replied back with one of those things I’ll never forget. He told me that when he got back, we would be the party that everybody wanted to be part of. It was this notion of ‘Who gives a damn about them? We are the ones! We are the light that everybody else is going to follow, don’t have any doubt about that. We’re together, we are going to be it.’ It was very sweet … very loving.”

It’s a memory that shaped Capossela’s view on leadership, “it was the first time I put it together; the notion that leadership is really about the gravitational pull you create that is independent of resources and title; I find that really cool.”

“It made me feel better. Sitting there as a freshman, reading his email, I went, ‘You know what? I think he’s right and it’s more organic than I’m making it up to be. I have more power over this than I’m giving myself credit for.’ I realized I can do this myself. That was a big change in mental state.”

Processing his brother’s response, Capossela let go of self-doubt (Box 2) and saw he could be the ‘life of the party’ (Box 3). Today, 27 years later, he still practices this lesson, which he refers to as: “You are the culture … activate yourself and coach others.”

Serve the Team as Your Family; Create Leadership Draft

Capossela’s second leadership learning on what he calls ‘creating leadership draft’ goes back to his childhood years spent serving at a family-run restaurant.

The youngest of three boys, Capossela started waiting tables at age 11. He lights up as he shares his roots, “I grew up in this Italian restaurant that my parents started when they were very young. We all lived there and slept in the apartment right above the restaurant. We spent all our waking hours trying to make the place work. ‘Is the place going to stay open another week?’ was the call; it wasn’t ‘How much money do I get to make?’ The waiters didn’t get to keep their tips; it all went to the tip jar. At the end of the night everyone got their share and then all of the sons gave their share to mom. Very early it was clear: ‘Hey, this isn’t about you making money, this is about the family.’ It was about making the restaurant successful. There is something about the restaurant, serving other people. You have to take out the garbage … it’s not a glamorous business.”

Talking about how this translates to his current role in building teams and hiring, Capossela shares his insights. “I think the joy that you take in somebody else’s expertise and in somebody else’s success is where you start. The more you can fill a team with people who take joy in each other’s success, the more good things are bound to happen.” He calls this effect ‘leadership draft’.

“You create a draft, like a set of cyclists do, as opposed to pushing people to excel. If you can fill a team with people who create a draft, others want to get in line and go super fast. Everyone can take their turn at the front doing the hard yard.”

Early on, Capossela gave up self-concern (Box 2) to make it all about serving the team, and creating leadership draft (Box 3).

Be Kind and Honest

As with most of us, we inherit both from our family’s greatness—in Capossela’s case, his team orientation stands out—and from their limitations. “The restaurant is transactional. You’re with someone for two hours and then they’re gone and so you learn being good at that façade, but that is not building a long-term, team-based relationship,” he says.

In the restaurant Capossela learned about performing, not about building high-trust relationships. “It took me a long time to learn how to be trusted by my coworkers because they kind of thought, ‘Well, that’s him performing, that’s not really him. He is doing the fancy specials, he is doing this fancy presentation and he’s really good at it, but is that the real guy? I don’t know who the real guy is.’”

He recalls a pivotal moment at a company offsite, “[the facilitators] put a bunch of us against the wall and then had a few others rearrange us physically in order of who you would follow and who you wouldn’t. About 29 people put me at the front of the line as the person they would follow. One woman put me at the very end of the line, as the least likely person she would follow. They asked her, ‘Tell us, why did you put Capossela at number 29? Did you get the order wrong?’ She said, ‘no the order is right; I don’t trust him. I don’t believe the things I am seeing from him. I don’t believe that’s what he actually believes.’ That was just an eye-opener.

“The key thing I had to learn was to be more direct about what I wanted and what I was thinking. My peers would tell me, ‘You’ve got this optimism and that sometimes leads to you being unclear.’ One said to me, ‘I had to learn when you said something was good it actually sucked, and when you said something was awesome it actually was awesome. If I do something bad, you have to tell me if that wasn’t good, not that it was good.’” Capossela shares, “I had to learn to be more articulate about what I was thinking and feeling, what my opinions were, as opposed to sort of trying to be part of the team. I had to learn to say, ‘Hey, I’m actually not with you on that.’”

Capossela gave up the belief that he had to be kind or honest with his team (Box 2) so that he could learn to be kind and honest with them (Box 3) – and that translated into higher trust relationships.

Give Everything, Learn, and Relax

With all his learning and achievement, does Capossela have it all figured out? Capossela is clear on this one. “It’s easy to say, ‘Oh, it looks like somebody here’s perfect.’ It’s not, it’s a mess,” he says. “We’re humans working together, competing with other companies with other human beings. It’s a really messy system. … The beautiful thing is that the job is so ridiculously vague and so completely impossible to do well that I’ve completely come to terms with the fact that any day could be the last day. That has made me really relaxed and sort of feeling, yeah, it could be the last day. And so, do you worry about it being the last day? Or do you say, ‘I’m going to make this the best day I can possibly make it and maybe I’ll get another one tomorrow’?”

He’s given up the unspoken belief that ‘I’ve got it all together’ (Box 2). Capossela now lives by the view that ‘Careers are unpredictable; give it all, enjoy the ride’ (Box 3).

If ChrisCap were to look at your leadership style, what beliefs and behaviors would he counsel you to selectively forget and put in Box 2? Which new ones would he suggest you adopt?

Vijay Govindarajan is the Coxe Distinguished Professor at Dartmouth’s Tuck School of Business and a Marvin Bower Fellow at Harvard Business School. He is a WSJ and NYT best-selling author, and author of Three Box Solution: A Strategy for Leading Innovation, HBR Press, April 2016. Watch the book trailer. Twitter: @vgovindarajan.

Hylke Faber is CEO of the Growth Leaders Network, a non-profit supporting a global community of leaders committed to self-growth and selfless service, and is Managing Partner of the culture and leadership consultancy Constancee. Hylke also directs the Leading as Coach programs at the Columbia Business School Executive Education program.

PrevThinkers50 Podcast: Sydney Finkelstein and Super Bosses
Thinkers50 Podcast: Pankaj Ghemawat and Business StrategyNext
PrevPrevious
NextNext
We use cookies to ensure you get the best experience on our website and continuing implies your consent - Read our full cookie policy Okay, don’t show me again
We Use Cookies...