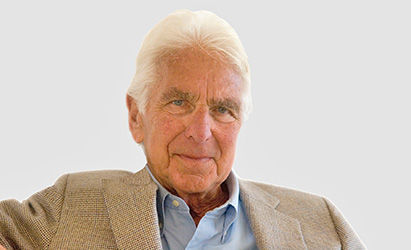 There is a point in the lives of leaders, a moment when the leader makes the grade, when they leap from management to leadership, from team member to leader. For Warren Bennis that moment came when he was the youngest infantry officer in the European theater of operations during World War II. This experience was what Bennis later labelled a “crucible”. “A crucible is by definition a transformative experience though which an individual comes to a new or an altered sense of identity,” Bennis wrote.

After the war Bennis was an undergraduate at Antioch College studying under Douglas McGregor, creator of the motivational Theories X and Y. Later, Bennis followed McGregor to Massachusetts Institute of Technology (MIT), where he received his PhD in economics and social science. He went on to join the school’s faculty and was chairman of the Organization Studies Department. “My early work was on small group dynamics, more a classical area of social psychology. I moved from there to T-Groups, sensitivity training and then into change in social systems,” recalled Bennis.

From being an early student of group dynamics in the 1950s; Bennis became a futurologist in the 1960s.   His work – particularly The Temporary Society (1968) – explored new organizational forms. For Bennis organizations would become adhocracies – roughly the opposite of bureaucracies – freed from the shackles of hierarchy and meaningless paperwork. (The term adhocracies was later used by Alvin Toffler, among others.)

At the same time as Bennis was predicting potential futures for the business world, he was confronting the sometimes frustrating realities of being a leader, as a university administrator, provost and executive vice-president, at the State University of New York at Buffalo, and as president of the University of Cincinnati.   While the field of leadership theory was where his passion lay, the practice did not live up to expectations.

“When I was at the University of Cincinnati I realized that I was seeking power through position, by being president of the university.   I wanted to be a university president but I didn’t want to do it.   I wanted the influence,” he said.   “In the end I wasn’t very good at being a president. I looked out of the window and thought that the man cutting the lawn actually seemed to have more control over what he was doing.”

Bennis returned to what he enjoyed the most: teaching, researching, consulting, writing and speaking about leadership. He became a distinguished professor of business administration and professor of management and organization USC Marshall School of Business in Los Angeles, where he founded the school’s Leadership Institute. He also chaired the advisory board of the Center for Public Leadership at Harvard University Kennedy’s School of Government.

“I have been thinking about leadership almost as long as I have been thinking,” he said. “It is probably a trap of my own making. My first major article came out in 1959 and was on leadership.   Since 1985 most of my work has been in that area. You build up some sort of brand equity and there is a degree of collusion between that and the marketplace – people say leadership that’s Bennis.   It makes life a little simpler.”

In 1985, Leaders: The Strategies for Taking Charge was published, co-authored by Bennis with Burt Nanus, founder and director of the Center of Futures Research at the University of Southern California. The book is based on research examining the lives of 90 of America’s best-known leaders. The eclectic mix of names included McDonald’s founder Ray Kroc, many other people from the worlds of business, sports, the arts, even an astronaut in Neil Armstrong

“They were right-brained and left-brained, tall and short, fat and thin, articulate and inarticulate, assertive and retiring, dressed for success and dressed for failure, participative and autocratic,” Bennis explained. But despite the diversity, they were united in one thing at least, they had all shown “mastery over present confusion”.

From these leaders, Bennis and Nanus identified four common abilities, management of – attention, meaning, trust, and self. Managing meaning involves the effective use of communications skills and technology to bring the vision to life and make it real. Effective communication is about analogy, metaphor, vivid illustration, emotion, trust, optimism, and hope.

Trust is the “the emotional glue that binds followers and leaders together”. Among other things trust is underpinned by consistency. The final thing that the leaders that Bennis studied shared was “deployment of self”. Becoming a good leader requires hard work.The emphasis is on persistence and self-knowledge, taking risks, commitment and challenge but, above all, learning.   “The learning person looks forward to failure or mistakes,” said Bennis. “The worst problem in leadership is basically early success.   There’s no opportunity to learn from adversity and problems.”

The leaders also possess “emotional wisdom”, a positive self-regard. This wisdom is characterized by an ability to accept people as they are; a capacity to approach things in terms of only the present; an ability to treat everyone, with courteous attention; an ability to trust others even when this seems a risky strategy; and the capacity to go without constant approval and recognition.

As Bennis powerfully and repeatedly suggested, leadership can be learned, and this lies at the heart of his work, and Leaders in particular: “Every person has to make a genuine contribution in their lives.   The institution of work is one of the main vehicles to achieving this.   I’m more and more convinced that individual leaders can create a human community that will, in the long run, lead to the best organizations.”

Later in On Becoming a Leader Bennis turned his attention to a common question in organizations, what is the difference between managers and leaders? It is an important distinction, said Bennis.

“To survive in the twenty-first century we’re going to need a new generation of leaders, not managers. The distinction is an important one. Leaders conquer the context – the volatile, turbulent, ambiguous surroundings that sometimes seek to conspire against us and will surely suffocate us if we let them – while managers surrender to it.”

By the mid-1990s Bennis was exploring group working and cooperative leadership. In his 1997 book Organizing Genius, he turned his attention to the power of groups, how groups organize, and the role of leadership in groups.

Once again Bennis questioned the notion of the heroic leader. The heroic view of the leader as the indomitable individual is now outdated and inappropriate. “He or she is a pragmatic dreamer, a person with an original but attainable vision. Ironically, the leader is able to realize his or her dream only if the others are free to do exceptional work.”

Rather than impose themselves on the group, leaders have to find a way to lead that fits in with the group. “Inevitably, the leader has to invent a leadership style that suits the group. The standard models, especially command and control, simply don’t work. The heads of groups have to act decisively, but never arbitrarily. They have to make decisions without limiting the perceived autonomy of the other participants. Devising and maintaining an atmosphere in which others can put a dent in the universe is the leader’s creative act.”

About the same time as Organizing Genius was published Bennis was also researching the teams of leaders below the CEO who are often the people getting things done in the organization. So in Co-Leaders: The Power of Great Partnerships (1996) Bennis and his co-author David A. Heenan, looked past Bill Gates who was CEO of Microsoft at the time, to his deputy Steve Ballmer. They also examined many other co-leaders to understand the relationships between leader and led, and discern commonalities.

The Heat is On

For their 2003 book, Geeks and Geezers: How Era, Values, and Defining Moments Shape Leaders, Robert Thomas and Bennis interviewed almost 50 leaders, “geeks” — leaders between the ages of 21 and 35 — and “geezers” — men and women between the ages of 70 and 93. Despite the differences in age, the two groups of leaders had some important things in common.

The research led to a model of leadership development. Successful leaders had four essential competencies: the ability to engage others through shared meaning; a distinctive and compelling voice; integrity; and adaptive capacity. Of these adaptive capacity was the most important.

For the perennially enquiring Bennis, connecting with the younger generation was clearly an opportunity to learn. Creating opportunities to learn was something he excelled at. When we last met, in one of his final visits to the theatres of London, we were struck by his continual questioning of us. He wanted to pick our brains, discover our perspectives, what we thought were the big issues. Such inclusive curiosity about the world and the people of the world lay at the heart of Warren Bennis’ work and life.

PrevWarren Bennis on the New Leadership
The New Interdependence – Four Pillars of SocietyNext
PrevPrevious
NextNext
We use cookies to ensure you get the best experience on our website. By clicking “Accept”, you consent to the use of ALL the cookies. Read More Settings Accept All Reject
We Use Cookies...