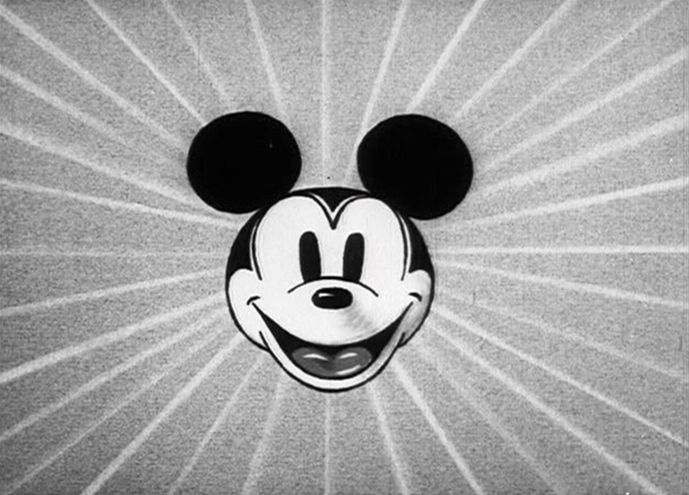 ‘I hope we never lose sight of one fact … that this was all started by a mouse,’ Walt Disney was fond of saying in his later years. The origins of Disney’s mousey inspiration are told in myriad variations. At one time it was reputed that in his early career he befriended a family of mice in his office. Their regular appearances on his drawing board proved inspirational. Nice story.

Alternatively, the Daily Sketch reported in 1938 that ‘On his way back to Hollywood in an upper berth he could not sleep. The continuous but slight creaking of the woodwork in his compartment sounded like a million mice in conference. The idea made him laugh and in that split second Mickey Mouse was born’. Perhaps.

The facts are that the mouse in question began life as Mortimer Mouse. Walt Disney’s wife, Lillian, did not take to the name and suggested Mickey as a replacement. Walt listened – whether this was to placate his wife or out of some deep realization that Mickey was the ideal name to launch a business empire will never be known. (Of course, why Mickey works and Mortimer doesn’t is a matter of serious debate – ‘Maybe Mickey Mouse didn’t sound quite as onomatopoeic as Mortimer Mouse, but was a friendlier, more informal name, suggesting an affinity with the common man,’ observed one book with due solemnity.)

On Sunday 18 November 1928, Mickey Mouse featured in one of the only cinematic epics of seven minutes in length: Steamboat Willie. This was the first cartoon which synchronized sound and action. Steamboat Willie reversed the tide of Walt Disney’s fortunes. Listening to Mrs. Disney was the turning point.

The role of listening in leadership is well established. And yet, it is commonly notable by its absence. You might have watched Undercover Boss, a popular TV series whose format has been sold throughout the world. The format is simple: a boss is disguised and sent to work at the front line of the organization. The results are predictable and predictably entertaining.

In a recent UK show, the CEO of a chain of nightclubs was dispatched to work at a selection of his clubs. He was surprised to find that young people drank themselves into a stupor or A&E (the emergency room). He was even more surprised to find that the toilets at the nightclubs weren’t very pleasant at the end of a long evening. Along the way, as his eyes were opened to the reality of his business, the CEO met some of the exceptional people working for the company – uncomplaining cleaners, managers who do virtually everything, young marketers getting people through the doors.

Week after week in the show leaders (or supposed leaders) encounter the reality of their businesses and are surprised. This begs an obvious question: why don’t they know what goes on in their organization?

Whatever the reasons, it is inexcusable for leaders not to understand the day-to-day reality of their organization.

Indeed, the most impressive and successful leaders have an intimate understanding of the minutiae of their organization. They also know that any organization relies on people doing fantastic things and going beyond the call of duty.

Leaders need to be on the lookout for new trends, actively eliciting information from a range of stakeholders, including customers, partners and employees. Rosabeth Moss Kanter of Harvard Business School suggests cultivating a series of ‘listening posts’ to help with this. She calls this skill tuning in to the environment. Do not tune out to the bad news about the business, either.

Listening is required because leadership is about challenging prevailing wisdom in the organization. Leaders absorb information from different sources, look for the patterns in the information, and then construct new patterns, question assumptions, find a new lens through which to view problems. Job rotations, interdisciplinary projects and interactions outside the organization all help with kaleidoscopic thinking, as Kanter calls it.

Only listening and tuning in enables the leader to appreciate a timeless truth: my agenda is not your agenda. Ever.

‘One of the things that I have learned is that everybody who walks through my door in my office has a bias. They are biased in some way and sometimes they don’t even know that they are biased,’ Novartis CEO Joe Jimenez told us. ‘The key to this job is to determine what is that bias and what should I really learn from the conversation that I just had with that person. It becomes a very interesting internal discussion that I have with myself as I am having meetings with people: to really identify their bias and search for the truth that is being communicated because the truth is in there somewhere.’

You have to go looking for the truth. Before interviewing Vittorio Colao, CEO of Vodafone, we were in a Vodafone store and asked the sales assistant whether she knew anything about him. ‘Oh yes, he comes in quite a lot,’ she replied – Vodafone is a big company, but the CEO makes the time to visit stores. ‘One of the problems of CEOs is that we risk living in a bubble: only taking British Airways, living in airport lounges and corporate boardrooms and talking only to other CEOs. My challenge is to keep learning new things in both my personal life and my business life,’ Colao told us.

At an airport early in the morning Colao noticed that one of Vodafone’s airport shops was closed at 6.15 a.m. and next door there were three shops open. Of such observations is leadership made.

Similarly, we talked with Ben Lewis, the CEO of the River Island retail chain. He had worked in the stores so knew how they worked. He reckoned that he could assess a store’s performance and problems in a forty-five-minute visit. This was something he did routinely every week. When we spoke it was a Wednesday and he had already paid a visit to the Brent Cross store in London and was heading over to White City later in the afternoon. He had managed to take in three stores in one day during the previous week.

‘I have to be able to look at product, walk into a shop and have a sense and a knowledge about whether it’s right or wrong and how to fix it,’ he says. Then there is the trawling of retail sites to see alternative approaches, Facebook posts, online blogs, student chat rooms and more. ‘I am hungry for information all the time. I review customer service comments, I talk to store managers, I talk to friends and the children of friends, I talk to staff that work in the fitting room, I talk to the buying team about the information they’re gathering.’

These leaders are grounded. They understand how their business works and the issues facing the people who work for them on the front line. They look, listen and learn.

But it is not only in retail businesses where this connectedness with reality is important. We asked a director of the Japanese company Fujitsu what he remembered about his first day with the company. It was over thirty years ago so it was a feat of memory. He paused and thought. ‘Yes, I remember. I was sent to work in a bank, a Fujitsu customer. It was unclear who worked for the bank and who worked for Fujitsu. That has always stuck with me – we work closely with our customers because we need to understand their needs and businesses.’

None of this is rocket science. Leadership isn’t. But, leading an organization, any organization, requires attention to detail and a connection to the reality of how the it works for customers, users and employees. There is no short cut. Listen up.

PrevThree Box Leaders Serve From Their Station
Thinkers50 Podcast: Anil Gupta and the Emerging Market StoryNext
PrevPrevious
NextNext
We use cookies to ensure you get the best experience on our website and continuing implies your consent - Read our full cookie policy Okay, don’t show me again
We Use Cookies...