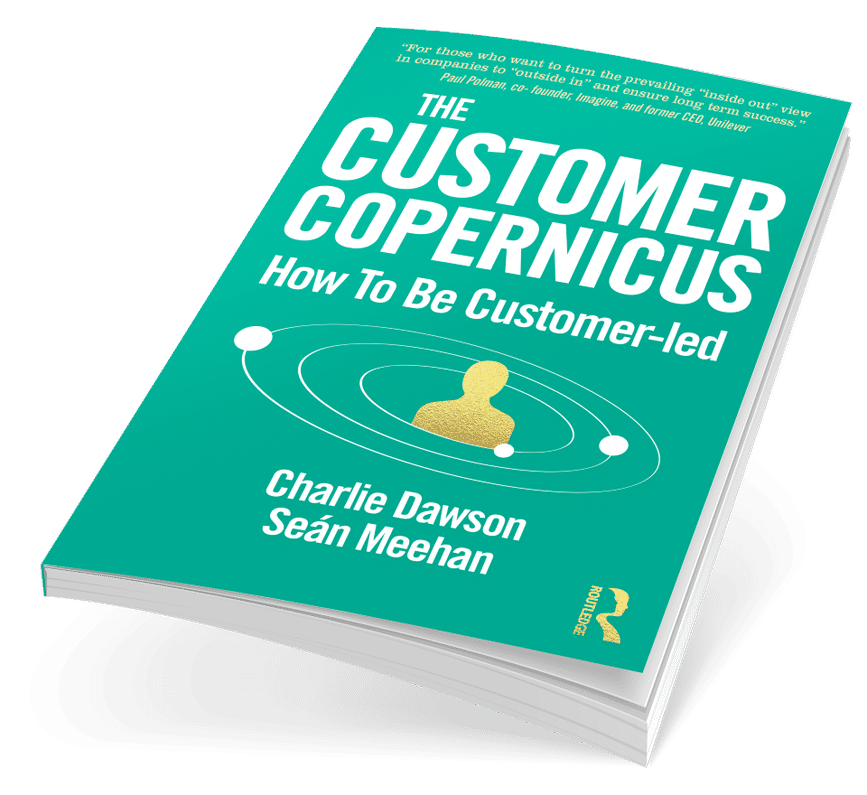 Yet being customer-led remains elusive for many

Some companies are great for customers – not only do they care but they change whole markets to work better for the customers they serve. Think of Amazon, easyJet and Sky. They make things easier and improve what really matters.  They have also enjoyed huge business success, growing and making plenty of money.

Given this looks obvious and it’s clearly attractive, why is it so rare?

In this article Charlie Dawson and Seán Meehan, authors of The Customer Copernicus, answer this question and show how companies can overcome challenges to become truly customer-led.

What should a business focus on?

“Earning lifelong relationships, one customer at a time, is fundamental to achieving our vision.”

While the words sound the same, the realities are different. In his April 2017 letter to shareholders, Bezos conveys a vivid picture of what being customer-led looks like and what it takes. Stumpf, in his 2016 letter, also says all the right things: ‘We are on our customer’s side.’ And, for a casual observer at the time, this might suggest Wells Fargo was as customer-led as Amazon.

Yet eight months later Stumpf resigned in the wake of a scandal revealing the bank had opened as many as 2 million accounts without the knowledge or approval of its customers, unfairly taking advantage of customer relationships to meet sales targets. Whatever he said or thought, the reality on the ground was the antithesis of being on the customer’s side.

What leaders say (and perhaps think) their company does and what it actually does can often be at odds. There is a saying/doing gap. We shouldn’t take customer-first exaltations at face value. They are common. But true customer-led success is not.

What being customer-led means

When we say customer-led, we mean being guided by what customers value – the underlying problems they are trying to solve or the outcomes they want – and then finding new and better ways to create this value, solve these problems or achieve these outcomes, leading in a market not following, inventing not benchmarking.

When companies do this well, their customers do well – they, or we, get a better quality of life, better solutions, lower costs of all kinds – financial but also effort, time, emotional pain, attention and more. And it’s not just customers that benefit; companies do well too – reaping significant rewards from the increased value they provide.

Why being customer-led is so rare

Our study of this subject led us to a discovery. The reason being customer-led is so rare despite being so obvious and so attractive comes down to the shared beliefs people have in organisations.

Shared beliefs are tricky things to deal with. They are unspoken, about what gets you a pat on the back or a frown, and as social animals we are highly attuned to the way a group works. We are also programmed to try to fit in. So even if you personally think that opening a new account for a customer without them knowing just to hit the monthly target is wrong, when everyone around you does it then it takes a brave soul to speak up and a lot more than that to change the practice.

This might give a clue to our next discovery, which was that outside-in customer-led beliefs are not natural but that inside-out ways of doing things are.

A customer-led initiative looks unattractive to an inside-out business. The value to the customer will be clear – for example increasing staffing on a store’s checkouts to reduce queues with shorter queues clearly better. The cost to the business is also clear. But the benefit to the business, in advance, is not. Will customers spend more or just be marginally more pleased? To get agreement to do something like this takes conviction… or belief. You can’t write a business case that will on its own satisfy inside-out leadership colleagues.

We learned that the ONLY thing powerful enough to change shared beliefs across a business is tangible action where the results run contrary to what people usually assume.  We call this a Moment of Belief, like a moment of truth. When something like the queuing initiative is tried and it works – for customers AND for the business – then people start to believe that another similar step might work too. If that step gets taken successfully belief grows another notch, and so on.

To get the first one to happen in a sceptical inside-out business requires a pre-condition.  We call it ‘burningness’. It means the current situation is on fire and so flips the risk from the status quo being safe to being madness to pursue, and doing something boldly different from being risky to the only sane thing to do.

Burningness has three possible causes – pain, fear or ambition, and that is in descending order of effectiveness.  Pain is best because things are going wrong, visibly, viscerally, now.  No one can argue that serious action is needed.  Fear is a step less convincing because things are fine now, it’s just that they are going to get worse at some point in the future.  Ambition is the least likely to help, not because it is weak – far from it.  It’s because it has to come entirely from within.  There is no crisis visible and instead the leader or the leading team has a burning desire to reach somewhere further on, somewhere seriously stretching.

Once a business goes on this kind of journey success can be extreme, catapulting O2 from laggard to market leadership in telecoms, tripling easyJet’s profits in the short haul airline business, taking Tesco from third in UK supermarkets to third in the world. 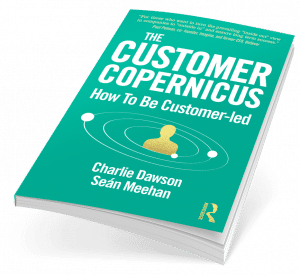 We hope to inspire leaders to build truly customer-led organisations, businesses that create customer value in new and better ways and to keep on doing so into the future. The Customer Copernicus is our way of doing it and we hope you enjoy learning from our work and from 18 customer-led case studies. We want to make this the way things are done around here, all over the world.

The Customer Copernicus: How to be Customer-Led by Charlie Dawson and Seán Meehan is published by Routledge on 17 May, priced £26.99, available from Amazon and leading international booksellers PrevThinkers50 Curated LinkedIn Live with Matt Beane | Learning to Work with Intelligent Machines
Back2Better Webinar: Why Innovation Fails and How To Fix It With Tony UlwickNext
PrevPrevious
NextNext
We use cookies to ensure you get the best experience on our website. By clicking “Accept”, you consent to the use of ALL the cookies. Read More Settings Accept All Reject
We Use Cookies...