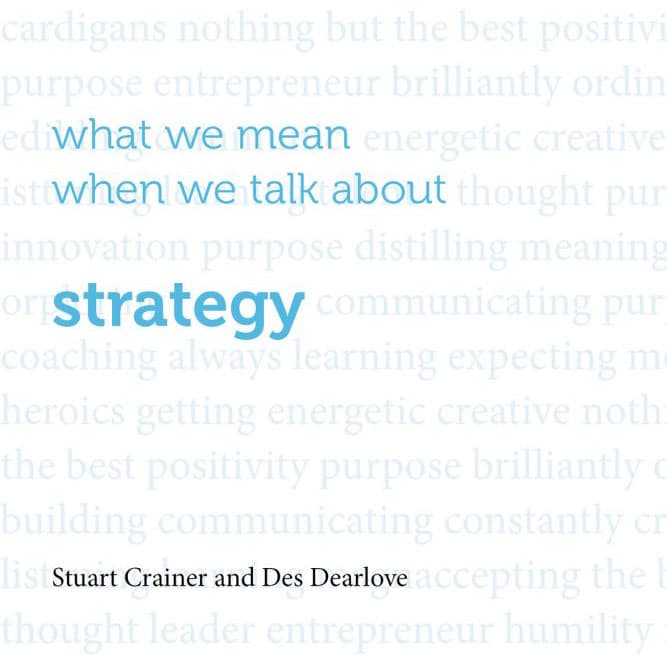 One of the most straight talking thinkers about strategy is the American academic Richard Rumelt. According to Rumelt, badly construed strategy has four hallmarks which should set alarm bells ringing. These are:

As Richard Rumelt has lamented, bad strategies are commonplace.  And, in an era of constant and unpredictable change, the practical usefulness of strategy is increasingly — and loudly — questioned.  The skeptics argue that it is all well and good to come up with a brilliantly formulated strategy, but quite another to implement it.  By the time implementation begins, the business environment is liable to have changed and be in the process of changing even further.

During the early 1990s, the death knell for traditional approaches to strategy was sounded.  “The humane thing to do with most strategic planning processes is to kill them off,” concluded a report by OC&C Strategy Consultants.

“As ‘strategy’ has blossomed, the competitiveness of Western companies has withered. This may be coincidence, but we think not,” noted CK Prahalad and Gary Hamel.

Research by the American Planning Forum found that a mere 25 percent of companies considered their planning processes to be effective.  Similarly, in his book The Rise and Fall of Strategic Planning, Henry Mintzberg took on the full might of conventional planning orthodoxy.  “Too much analysis gets in our way.  The failure of strategic planning is the failure of formalization,” said Mintzberg, identifying formalization as the fatal flaw of modern management.

Mintzberg argued the case for, what he labeled, strategic programing.  His view was that strategy has for too long been housed in ivory towers built from corporate data and analysis.  It had become distant from reality, when to have any viable commercial life strategy needs to become completely immersed in reality.  “Strategies appear at predetermined times, popping out when expected, full blown, all ready for implementation.  It is almost as if they are immaculately conceived,” he caustically observed.

After a decent period of mourning, strategic planning began undergoing something of a re-birth. First, rather than being regarded as an annual ritual, strategy is now more commonly seen as a continuous process, a dialogue rather than a monologue.  Second, the focus is on the big picture rather than on operational plans. Instead of weighty planning departments filled with bright minds producing great plans never to see the light of day, the emphasis is on strategy as part of corporate development with small teams working on distinct projects calling on outside consultants when necessary.  The role of the consultants principally lies in benchmarking corporate performance, monitoring and identifying external trends and helping develop a corporate vision.

All this confirms that, amid its constant rise and falls, strategy remains deeply bedded in confusion.  Rarely has so much theorizing amounted to so little effective practice.  The confusion over such a well-debated issue can be attributed to a number of factors:

Confusion over what strategy actually is.  There is a confusion between what an organization is actually doing, what it says it is doing and what it should be doing.  In practice, strategy tends to embrace all three.

The sheer profusion of approaches. In the faddish world of management thinking no single subject has generated so many bright ideas — from strategic intent to core competencies, blue oceans to balanced scorecards.

Confusion with the actual processes of developing and then implementing strategy.  The process remains clouded by verbiage.  Does an organization study its marketplace and competitive environment and then change itself to meet perceived opportunities?  Indeed, Harvard’s Michael Porter defines strategy as the positioning of the company relative to its industry environment.  Or, does strategy begin with the organization, examining what it excels at and then aim to make the most of those assets in the current environment?

The shift from linear thinking to emergent chaos.  In the current business environment where the calls for change and transformation are constant, the traditional methods of formulating and implementing strategy are increasingly questioned.  The conventional approach takes as its guiding light the acronym MOST (Mission, Objectives, Strategy and Tactics).  This offers an orderly progression from creating a mission to making the strategy happen.

Life is no longer so simple.  “In practice, the real process of strategy development and direction setting is much more messy, experimental, uncertain, iterative and driven from the bottom upwards,” says Andrew Campbell of the Ashridge Strategic Management Centre.  “There are five reasons for rejecting the MOST framework.  First, the competitive economic system in which companies act provides constraints that are often interpreted as objectives.  Second, strategy and objectives are intertwined, not linear.  Third, it is useless to develop a separation between strategy, tactics and operations – insights about creating value come as often from operating details as from broad strategic concepts. Fourth, academics and consultants differ in their views about how insights can best be developed and captured.  Fifth, there are also differences in view about how best to implement strategy in an uncertain world.”

The battle between analysis and intuition.  From this it would seem that the days of highly analytical, rational, strategy creation are past.  But, strategy can neither be purely rational nor purely intuitive.  Indeed, one of the core skills of managers is to know when and how to use their intuitive judgement of a particular situation.

Confusion is endemic.  But, argues London Business School’s Costas Markides, it need not be.  “The confusion surrounding strategy manifests itself in a variety of ways.  But, in reality, the confusion is unfortunate – and unjustified.  Strategy is a very simple thing — at its simplest it is five or six creative ideas that tell us how our company is to fight the competitive battle in its industry.  It is not a plan; it is not a hundred-page report; it is not a budget; and it not a goal.  It is just five or six creative ideas.  If your company cannot put down its strategy on one sheet of paper then it does not have a strategy.”  The problem is that managers have been reared on an unhealthy diet of weighty reports, pithy distillation remains an elusive art.

This was originally published in What we mean when we talk about strategy by Stuart Crainer and Des Dearlove (Infinite Ideas, 2016).

PrevHow Leaders Build Game-Changing Organizations
Thinkers50 Podcast: Jonas RidderstråleNext
PrevPrevious
NextNext
We use cookies to ensure you get the best experience on our website. By clicking “Accept”, you consent to the use of ALL the cookies. Read More Settings Accept All Reject
We Use Cookies...