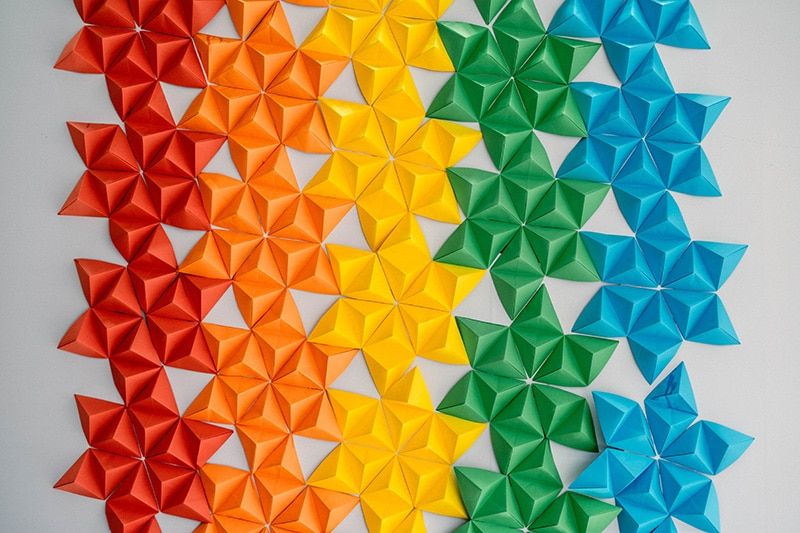 Looking at the executive teams we work with as consultants and those we teach in the classroom, increased diversity of gender, ethnicity, and age is apparent. Over recent decades the rightful endeavor to achieve a more representative workforce has had an impact. Of course, there is a ways to go, but progress has been made.

Throughout this period, we have run a strategic execution exercise with executive groups focused on managing new, uncertain, and complex situations. The exercise requires the group to formulate and execute a strategy to achieve a specified outcome, against the clock.

Received wisdom is that the more diverse the teams in terms of age, ethnicity, and gender, the more creative and productive they are likely to be. But having run the execution exercise around the world more than 100 times over the last 12 years, we have found no correlation between this type of diversity and performance. With an average group size of 16, comprising senior executives, MBA students, general managers, scientists, teachers, and teenagers, our observations have been consistent. Some groups have fared exceptionally well and others incredibly badly, irrespective of diversity in gender, ethnicity, and age.

Since there is so much focus on the importance of diversity in problem solving, we were intrigued by these results. If not diversity, what accounted for such variability in performance? We wanted to understand what led some groups to succeed and others to crash and burn. This led us to consider differences that go beyond gender, ethnicity, or age. We began to look more closely at cognitive diversity.

Cognitive diversity has been defined as differences in perspective or information processing styles. It is not predicted by factors such as gender, ethnicity, or age. Here we are interested in a specific aspect of cognitive diversity: how individuals think about and engage with new, uncertain, and complex situations.

The AEM cube, a tool developed by Peter Robertson, a psychiatrist and business consultant, assesses differences in the way people approach change. It measures:

Knowledge processing: the extent to which individuals prefer to consolidate and deploy existing knowledge, or prefer to generate new knowledge, when facing new situations
Perspective: the extent to which individuals prefer to deploy their own expertise, or prefer to orchestrate the ideas and expertise of others, when facing new situations
Having run the strategic execution exercise over 100 times and observed such big differences in the performance of teams, we decided to use the AEM cube to measure the level of cognitive diversity in groups undertaking the exercise. Our analysis across six teams who recently undertook the exercise shows a significant correlation between high cognitive diversity and high performance, as shown in the table below: 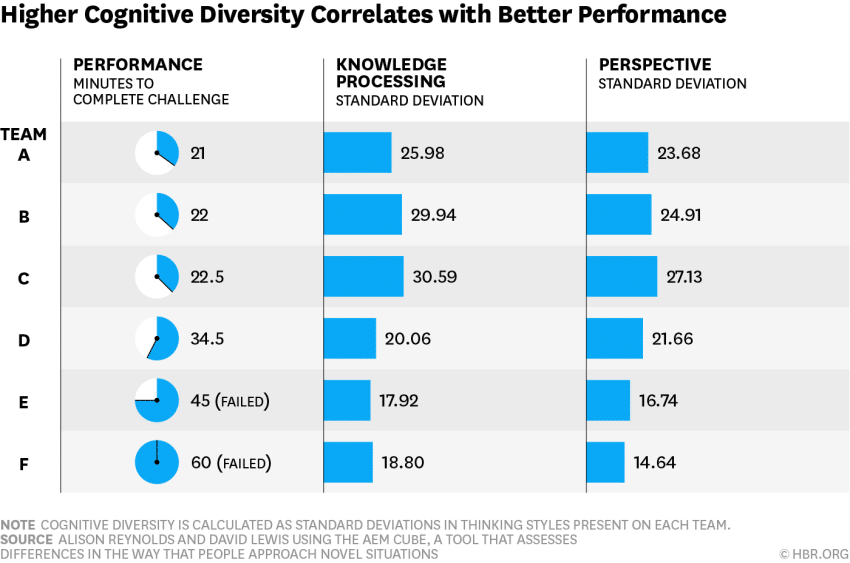 Intuitively, this makes sense. Tackling new challenges requires a balance between applying what we know and discovering what we don’t know that might be useful. It also requires individual application of specialized expertise and the ability to step back and look at the bigger picture.

A high degree of cognitive diversity could generate accelerated learning and performance in the face of new, uncertain, and complex situations, as in the case of the execution problem we set for our executives. Based on these indicative findings, we are continuing our research with a larger sample.

These cognitive preferences are established when we are young. They are independent of our education, our culture, and other social conditioning. Two things about cognitive diversity make it particularly easy to overlook.

Someone being from a different culture or of a different generation gives no clue as to how that person might process information, engage with, or respond to change. We cannot easily detect cognitive diversity from the outside. It cannot be predicted or easily orchestrated. The very fact that it is an internal difference requires us to work hard to surface it and harness the benefits.

We worked with a startup biotechnology company. When its R&D team members tried our strategy execution task, they performed terribly. The team, mixed in terms of gender, age, and ethnicity, was homogeneous in how it preferred to engage with and think about change. These were PhD scientists who had been attracted to biotech to explore their specialties. But, with little cognitive diversity, they had no versatility in how to approach the task. They never finished.

On another occasion, we worked with a group of IT consultants on the same exercise. If we had not called a halt, we would have had to cancel dinner. All activity ceased, as each individual tried to work out a solution in their own head.

Conversely, we have observed siblings of the same sex, generation, and schooling, typically considered a low-diversity group, demonstrate a high degree of cognitive diversity and solve the task at speed. Recently, two teams of European middle-aged men went head-to-head on the challenge. One failed to complete it; the other succeeded. The difference? The successful team had much higher cognitive diversity.

There is a familiar saying: “We recruit in our own image.” This bias doesn’t end with demographic distinctions like race or gender, or with the recruiting process, for that matter. Colleagues gravitate toward the people who think and express themselves in a similar way. As a result, organizations often end up with like-minded teams. When this happens, as in the case of our biotech R&D team, we have what psychologists call functional bias — and low cognitive diversity.

Functional bias is a problem for teams facing new uncertain and complex situations because, with little cognitive diversity, the team will have limited ability to see things differently, engage in different ways (e.g., experiment versus analyzing), or create new options. Similarly, when organizations initiate change programs, they often seek out and identify advocates or change agents to support activities. Those selected often have a similar approach to change. This lack of cognitive diversity has two impacts. First, it reduces the opportunity to strengthen the proposition with input from people who think differently. Second, it fails to represent the cognitive diversity of the employee population, reducing the impact of the initiatives.

To overcome these challenges, make sure your recruitment processes identify difference and recruit for cognitive diversity. And when you face a new, uncertain, complex situation, and everyone agrees on what to do, find someone who disagrees and cherish them.

If you look for it, cognitive diversity is all around — but people like to fit in, so they are cautious about sticking their necks out. When we have a strong, homogenous culture (e.g., an engineering culture, an operational culture, or a relational culture), we stifle the natural cognitive diversity in groups through the pressure to conform. We may not even be aware that it is happening. The chart on the left below shows, according to the AEM cube, the self-assessed cognitive diversity of a group of 32 managers from an organization executing a new strategy. The chart on the right shows how the same managers were perceived by their direct reports. A lot less diverse! 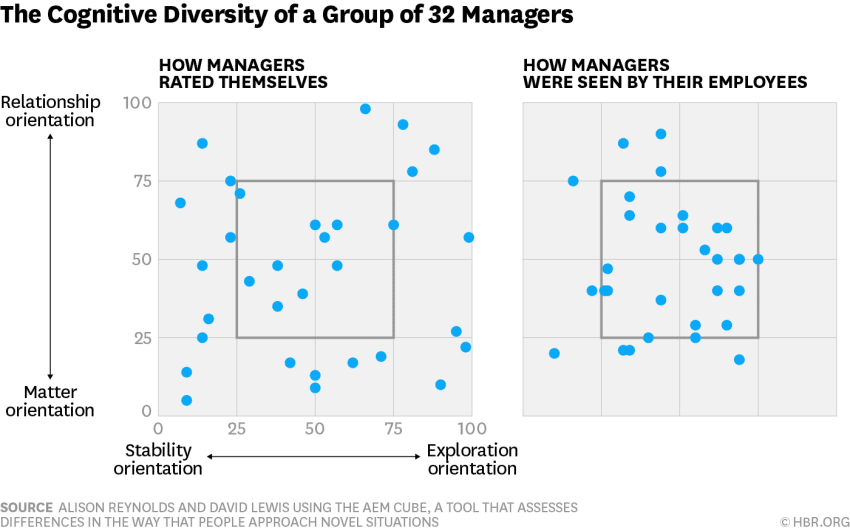 If cognitive diversity is what we need to succeed in dealing with new, uncertain, and complex situations, we need to encourage people to reveal and deploy their different modes of thinking. We need to make it safe to try things multiple ways. This means leaders will have to get much better at building their team’s sense of psychological safety.

There is much talk of authentic leadership, i.e., being yourself. Perhaps it is even more important that leaders focus on enabling others to be themselves.

Prev2018 European Business Forum in Odense, Denmark
Thinker of the Month: Richard D’AveniNext
PrevPrevious
NextNext
We use cookies to ensure you get the best experience on our website. By clicking “Accept”, you consent to the use of ALL the cookies. Read More Settings Accept All Reject
We Use Cookies...