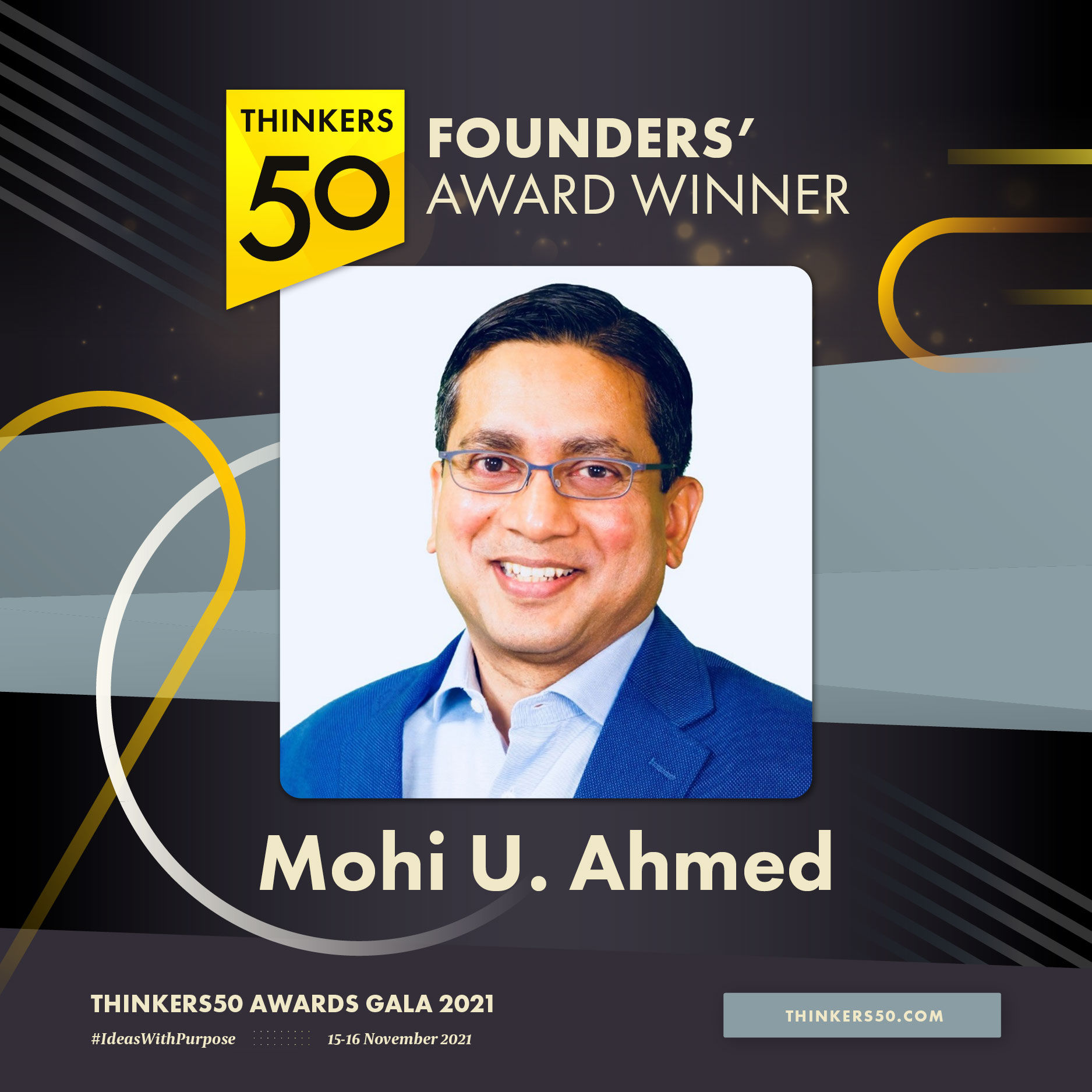 Thinkers50 is delighted to announce that the recipient of its 2021 Founders’ Award is Mohi U. Ahmed, a Bangladesh-born Canadian, currently working in Tokyo, Japan where he is the Executive Adviser on Open Innovation at Shimizu Corporation.

‘Mohi is a practitioner who realises the power of ideas,’ says Thinkers50 cofounder Des Dearlove. ‘We have known him for more than a decade and have always admired and been inspired by his enthusiastic embrace of the latest management thinking and his willingness to put ideas to work first at Fujitsu and now at Shimizu. He puts collaboration and innovation at the heart of all his endeavours.’

Mohi Ahmed was named as one of the world’s key “Idea Practitioners” in the book What’s the Big Idea? and was also featured in Lynda Gratton’s book Glow. In addition to working in industry for more than 30 years, he has worked with many world-class thinkers in academic institutions around the world. He served as a Visiting Scholar at Haas Business School — University of California at Berkeley, Harvard Business School in Boston, and Hitosubashi University’s Business School — ICS in Tokyo. He has a PhD in Applied Science from Simon Fraser University in Vancouver and continued his studies of Entrepreneurship at Cambridge University and Sustainability at Oxford University while he was working in the UK. He is the coauthor of Living Service — How to Deliver the Service of the Future Today, served as a visiting professor at Ritsumeikan Asia-Pacific University in Japan, and established and managed the Open Innovation Gateway — Powered by Fujitsu based in Silicon Valley, California. He also served as the Principal Strategist at Fujitsu HQ in Japan.

‘I am thrilled and honored to receive this award from Thinkers50 which is an organization I have known of and worked with over the last decade. It is recognition of the people I have worked with and the fantastic collaborations I have enjoyed with the great thinkers like Ikujiro Nonaka, Henry Chesbrough, Steve Blank, Lynda Gratton, Amy Edmondson, Alex Osterwalder, Navi Radjou, Scott Anthony to name a few from the Thinkers50 community. Stuart and Des like to say there is nothing so practical as a great idea with purpose, and I hope I have gone some way to proving that during my time at Fujitsu and now at Shimizu.’